The reality of information without boundaries. 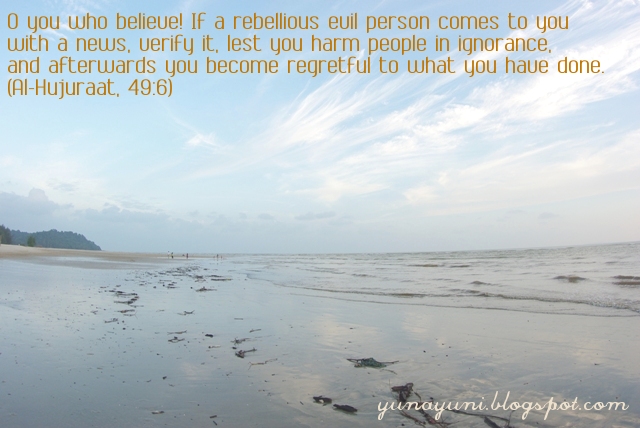 Something to remind us on the many gossips and rumors that we hear nowadays.

As of late, I can’t help but notice that Facebook has started to bring more negative than positive vibes.

It has become a medium of humiliation, where people make fun of each other, sometimes just out of random pics of total strangers. One random pic can go viral and people will start giving their own opinions, not realizing that their remarks already reflect what kind of person they are.

It has become a place to spread rumors that sometimes lead to the despair of others.

It has become a place that fosters conflicts, especially to those who do not know what in the world internet ethics is.

It has become a place to start a fitnah, by sharing hoaxes as well as stories that we do not have any slightest idea whether it is from a legitimate source. What if what we share is not true? Imagine how much damage it could do to the victimized party?

It has become a place to show how desperate people are.

It has given a sense of falsity, where people behave totally differently inside and outside Facebook.

And many more, if you take the time to look closely.

Funny that Facebook was invented to bridge the gap, and bringing people closer. But look at what happens now, to a certain extent, while we are busy catching up; we do not realize that we are creating a new “gap” somewhere else!

P/S : Now I understand why some people do not bother to have a Facebook account at all!
Labels: current affairs self reminder