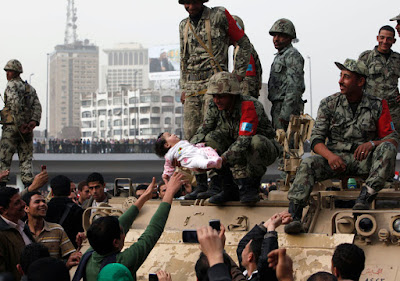 In light of the recent uprising in Egypt, I have decided to post this photo and an open letter to express my opinion on the upheaval.
I found this photo at Reuters online.

It touches my heart, that amidst the chaos, a baby can still put a smile on the face of protesters and the army. Yet I wonder what in the world is the poor baby doing in the middle of a very grim commotion.

This made me realize that the Egyptians are in a very desperate state. Their citizens from all walks of life, men and women, have come to a point where they feel that they should end the dictatorial reign of Hosni Mubarak. 30 years has been enough, and inspired by the recent Tunisian upheaval, the people finally found their strength to fight back.

Human, is a very powerful creature. Especially, when put in a dire situation. In this context, the people are fighting for the survival of their democracy. The human instinct of survival cannot be undermined, for when a human is placed in such situation, certain unfavorable traits will surface. Aggressiveness is for sure.

In great numbers, the impact is even more colossal. The people may have a valid reason for such act, and the crooked leader deserves this rage. But it is sad to see, that this kind of action has its collateral damages. The country is cliffhanging. Their economy has stalled, medical services and food rations are interrupted and communication has been cut off. Not to mention their convicts are now roaming freely on the streets, creating a perfect hostile environment. Foreigners are now fleeing the country, and even the airport is not a safe place anymore.

As of this time it seems like the demands of the Egyptian people are met bit by bit, but there is no sign that Mubarak will step down per se. I have a feeling that there will be no rest in the near future as the most favorable action expected from the dictator is that he steps down, get on a plane and disappear.

I pray for the well being of the people and the recovery of the country. It is heartbreaking that things had to be this way but for the rest of the remaining corrupt leaders I hope that they get a rude awakening that they should never underestimate the power of their people.

Democracy, is something that should be exercised, in all aspects of governing a country, not just a mere concept to make good face, while in the shadows there are unjust things happening, discreetly injuring the rights of the people.