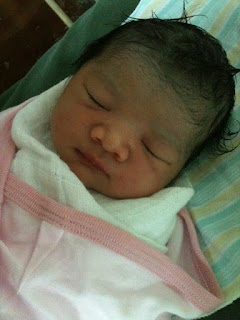 I am cuddling my little angel while i am attempting this post now. She is just done with her supper.

My baby, Engku Salsabila bt Engku Emri, have arrived safely into the world on 7th Oct 2010,5.34pm, weighing in at 3.19kg, via csection. I was induced on my 38th week of pregnancy, due to my high blood pressure. In retrospect i wish i had a normal delivery, and of course i wish i could have waited until nature makes its course. Anyway i am still thankful to Allah because we both made it through, and as the saying goes, kita hanya mampu merancang, Tuhan yg menentukan..

My first labour experience was a really impactful one. Because i was not prepared for a csection, the journey was not as what i expected at all.

I admitted myself into the hospital on 6th oct. Got induced with a gel method in the afternoon. Contractions happened shortly after, but it was still bearable and period-pain like. I even had dinner at a fav spot.I guess everyone does this heheh.

Spent the night with the contractions, and leaked just a bit of amniotic fluid with bloody show. I thought i was dilated much but to my dismay my cervix just barely made it to 2cm.

The next morning doc came over and my dilation was still poor. So she sent me to the labour room and it was time for the dreaded Pitocin. After the 2nd bottle, the contractions was really close and very strong. Dilation was just abt 5cm, and it was already 24hrs since i was induced.

During the strong contractions i was really using up my energy to endure the pain. My obgyn noticed that baby's heart rate started to drop with every contraction. After a while, she made a calculated decision that i had to go for an emergency big C.

So there i was, on the operation table and under a general anasthetic. Usually moms get half body anasthetic but maybe due to my emergency condition i had to go under. It was my first time in an operation theatre, but i had no time to freak out due to the extreme pain.

Next thing i know, i was awakened by the operation team. I was so drowsy and had to go for a bed rest for the next 6 hrs. Even so i got the chance to meet my angel, despite my exhaustion i fought my eyes and saw her sleeping sound beside me :) The feeling was overwhelming and i felt so complete.

There are many things that i have learn from this experience, and the most is to always be grateful to God for giving me a wonderful husband who stood by me through the worst of times.

And yes, as natural as pregnancy and labour can be, always prepare yourself with the many possibilities that it can bring. The most important part is getting you and your baby through, safely.
Labels: baby blues our bella

rina said…
congrats yuni.. as long as mom and baby are safe and healthy, other things doesn't matter.
11:23 AM

J@ja said…
Alhamdulillah, all went well. Every pregnancy/birth is unique. We have our own (and different) story to tell. Nonetheless, a life changing experience :D
12:45 AM

KC said…
hi dear, just read your post here. seems like aysha and bella is just weeks apart! aysha was born on 26/10/10 hehe.. i was also on my 38th weeks when i had to be induced due to high blood pressure and protein in urine! wow.. the similarities~ =)
12:05 PM