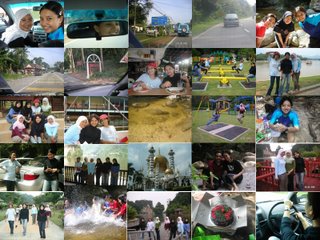 Yesterday was another day to remember. First of all it was my roomate's birthday. And it was also Papa and Mama's 24th Anniversary.

Yesterday we celebrated Mira's birthday by hitting the road.Packed up our stuffs, along with some sandwiches and Arfah's hamper that she got during EDX recently, and headed for Ulu Kenas Waterfalls, at Kuala Kangsar, early in the morning.

It took us an hour and a half to reach the waterfall. We weren't sure about the route but heck, we reached there eventually. Thank God we weren't lost. As yesterday was only a weekday, there weren't so many people around. And that gave us another advantage of having a splendid spot to ourselves. The water was freezin cold, but we didn't give a damn. Haha. Spent 2 hours having fun in the water, eating sandwiches, celebrate the birthdaygirl and splashing in the water again. 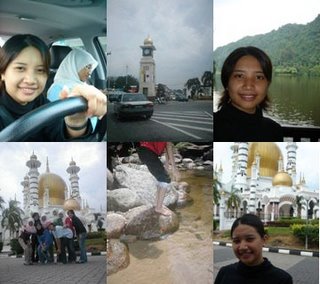 Then we headed for Kuala Kangsar to have lunch by the river, and went for Zohor prayers at the eminent Ubudiah Mosque. That was the first time i reached Kuala Kangsar, eventhough I have been spending 4 and a half years in UTP. The mosque was majestic, and I really admire the beautifully crafted ceilings bearing all 99 Names of Allah. After refreshing ourselves, we headed to Ipoh to Gunung Land Recreational Park.

Gunung Lang Recreational Park was actually like a valley, residing in the middle of a few hills with lush green jungles. The park is also in the middle of a lake and we had to take a RM3 boatride to the park. There was not many people around there too, because of the Tuesday. Gunung Lang was actually very beautiful, but I bet not many people know about it, because the entrance road and the promotion was not as attractive as the place. Pity. But i really recommend the place if you visit Ipoh, honestly it is worth the penny. The scenery was captivating.

By the time we finished hanging aroung the park, it started to rain. It was our last destination anyway, so we just head back to UTP after that. Had dinner at a favourite restaurant along the way, and reached UTP right before Maghrib.

I can say that yesterday's trip was worthwhile. Weekdays is the perfect time to do such thing, trust me. You skip the part where you get headache's because of too many people around, and you would not have to worry about the traffic. Now I can cross Kuala Kangsar, Gunung Lang and Ulu Kenas off my list. Where next? I am thinking of Lenggong Archaelogy Museum. Hopefully.. =)

P/S : Yesterday also was my first time being the driver of a long distance trip. Now I know how exhausting it feels. Ngeheheh.