The Kite Runner, by Khaled Hosseini. 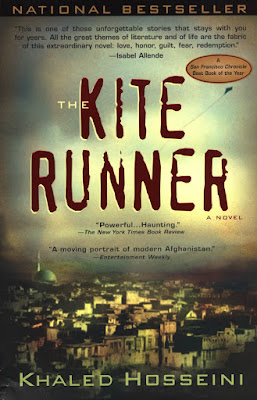 I am currently engrossed in this riveting book, The Kite Runner.

Khaled Hosseini’s writing has won me over since I finished his second book, A Thousand Splendid Suns. The Kite Runner was also produced as a movie in 2007.

"In The Kite Runner, Amir and Hassan grow up together in Afghanistan like brothers, although they couldn't be more different. Amir is the son of a wealthy businessman, a Sunni Muslim, a Pashtun, and he's educated and reads voraciously. Hassan's father is a servant to Amir's father, and Hassan is a Sh'ia Muslim, a Hazara, he's illiterate, and he has a harelip. But neither boy has a mother and they spend their boyhoods roaming the streets of Kabul together. Amir, though, continually uses his superior position to taunt or abuse Hassan, and one day hides in fear as Hassan is beaten and raped mercilessly by bullies. The Soviet invasion of Aghanistan sends Amir's family to the United States, but he returns there as an adult during the Taliban rule to atone for his sins to Hassan. Khaled Hosseini is an Afghan émigré living in San Francisco and his debut novel has received mostly good reviews. The Denver Post says The Kite Runner "ranks among the best-written and provocative stories of the year so far." - via http://www.reviewsofbooks.com/