It was 8pm at night when i finally reached home last Wednesday. Picked up Bella at the nursery and then headed straight home. Yes i was late, because unfortunate event no.1 happened ; there was a problem with a system i was supporting at office so i had to stayback for the vendor.

It has been a while since i came home late and the sky is already dark. No lights were switched on at the house, so i decided to leave the engine and the car lights on, and Bella in the air-conditioned car. As usual i went for the door, unlocking it and immediately turned on the porch and living room lights.

I noticed the trinket box on our shoe rack is open. I did not recall doing so but i just let it go."Maybe it was hubby", i thought. I called hubby and asked, of course it was not him.

I was feeling uneasy, so cautiously i made my way to the bedroom. I noticed the lights were on, and when i peeked in, my handbag contents were scattered on the bed. That was the point when i realized that something bad has happened. Somebody has broken into the house. I immediately left the house, picked up Bella who was already crying (as if she sensed something has gone wrong) and made our way to the neighbours.

I thank God that while i was in the house, the thief was gone.God knows what could have happened if i caught him redhanded. My thoughts was only on Bella at that point of time, of how was i supposed to save my child if i was caught in danger.

I left Bella with my neighbour and went back to the house. It was confirmed that somebody broke in. The culprit managed to break the 2nd bedroom window lock, and cut the grill open. I think he was a small sized person, seriously the hole barely fits a teenage kid.

All in all the total damage was hubby's wedding band :( , my baby's Avent diaper bag (i loved this bag so much huhu), hubby's DSLR lens (a few of them) and maybe some small cash on the dressing table. He was in hurry probably, because he did not noticed hubby's laptop in the cupboard and his DSLR under the pillow (thank God again).

Hubby went to Cherating Police Hut when he got back, but sadly there was no Inspector based there, who can do a whole crime scene investigation. The ones stationed there dropped by and just inspected the house, reminding us not to touch anything until the inspector comes. However he did not, not even the next day, we had no choice but to fix the grill and window again as we had to leave for Kota Bharu on Friday. The culprit even left his Raybans, and some tools he used for the break-in.

It may have been a drug addict or someone from the nearby village. He even dared to break in during the day. How so conducive the area behind our house is. Sigh.

As unfortunate as it may be, i really could not stop being thankful that he did not break in when i was at home with my baby. I am a bit traumatized by this event, more of shocked than angry. I felt insecure being in my own home. We should be more more cautious and vigilant next time, and never take safety for granted anymore. 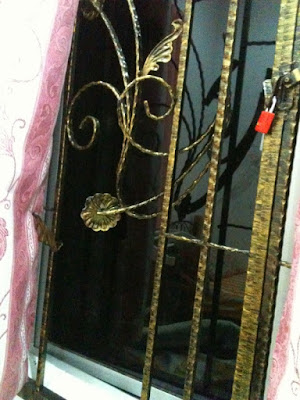 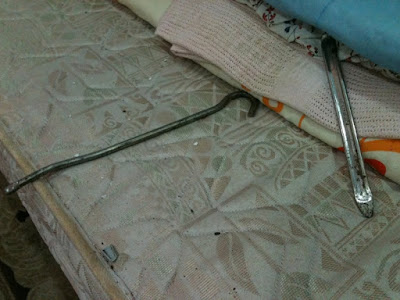 The tools. Darn it, the room became so messy.